Press enter to begin your search

About a year later than initially expected, the first two MQ-4C Triton unmanned aircraft arrived in Guam over the weekend, marking a significant step toward increasing the Navy’s Western Pacific reconnaissance and surveillance capability, the service announced this weekend.

The two Tritons are part of an early operational capability being run by Unmanned Patrol Squadron (VUP) 19, which is flying and maintaining the aircraft from Andersen Air Force Base in Guam. VUP 19 is developing the concept for incorporating the high-altitude, long-endurance system into the maritime domain and augmenting the Navy’s current reconnaissance and surveillance operations with manned aircraft. 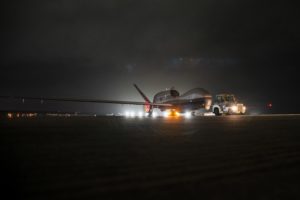 To see more about it : USNI News